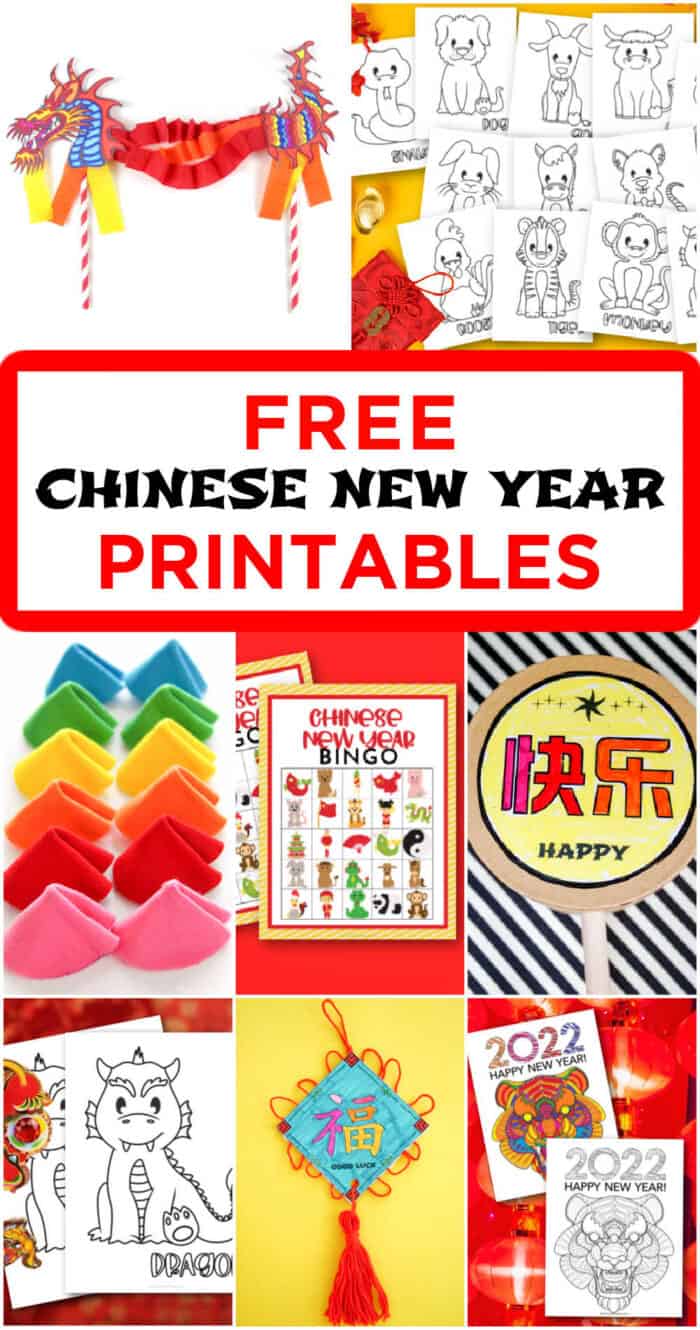 Have all kinds of Lunar New Year fun with these Chinese New Year printables. Fun and festive printables including printable crafts, printable games, and coloring pages for kids.

We highlighted these Chinese New Year Printables along with some other fun kid's crafts in our January Crafts for Kids along with our 101+ Easy Craft Ideas for kids.

For those unfamiliar, the Chinese New Year is a spring festival celebrating the new year based on the Chinese calendar otherwise known as the lunar calendar.

It is a traditional Chinese holiday celebration that lasts about two weeks. During the celebrations, there are parades and families celebrate with different gifts and Chinese New Year traditions throughout the two weeks wishing their family and friends good fortune in the new year.

With the changing of the new year of the lunar calendar, the Chinese believe each year to represent one of the twelve Chinese zodiac animals. The twelve animals include the rat, ox, tiger, rabbit, dragon, snake, horse, goat, monkey, rooster, dog, and pig.

Some in the Chinese culture believe that those who are born the same year as a particular zodiac animal, that they possess similar character traits to that of the animal.

Here are the animals and the recent years they represent.

These crafts and printables are a great way to learn and celebrate the Chinese New Year. It is an important holiday in China and throughout Asia. It is a great idea to have a lesson plan around the making of the craft

Have some HAPPY celebration of Chinese New Year with this sweet printable "happy" sign in Chinese for a drum with how to make the Chinese drum.

How to make a good luck ornament with this free printable Chinese character "good luck" sign with full craft how-to.

This lucky red envelope craft is a great activity for the kids.

This cute baby tiger coloring page is all kinds of sweet, cute, and free.

Celebrate the year of the monkey with this sweet cute baby monkey coloring page printable worksheet.

Have some fun with this cute baby dragon coloring page.

How to Draw a Dragon Easy

Have some drawing fun with this cute dragon drawing tutorial. We've included a free printable tutorial too.

Year of the Tiger Coloring Pages

Have fun celebrating the year of the tiger with these free printable coloring pages. 2022 is the Year of the Tiger. The next year will be in 12 years and 2034

CONNECT WITH MADE WITH HAPPY!

Looking for crafts to keep your child busy? Sign up for my 5 Ridiculous HAPPY Activities in under 30 minutes for your kids delivered directly to your inbox!

Find and shop my favorite products in my Amazon storefront here!